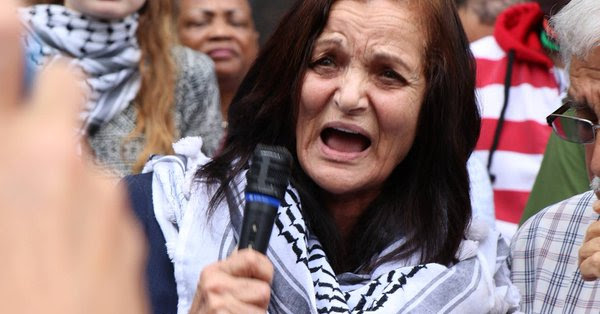 On Thursday, August 17th, Judge Gershwin Drain again violated the rights of Palestinian-American icon Rasmea Odeh, this time by not allowing her to read her entire statement to the court.

Close to 150 supporters joined Rasmea in Detroit for what was supposed to be a routine sentencing hearing. The defense, prosecution, and judge had already agreed to a plea agreement finalized in April, and Rasmea was looking forward to finally being able to tell her entire story, but Drain interrupted her three separate times, the last with a threat to jail her for contempt of court.

Prior to Rasmea’s statement, her lead attorney, Michael Deutsch, chastised the prosecution for bringing the indictment in the first place.

Although the Rasmea Defense Committee has insisted for almost four years that the immigration case brought against her in October of 2013 was nothing but a pretext to attack the Palestine support movement in the U.S., Drain tried to protect Israel and the U.S. government from Rasmea’s brutal description of their crimes against her, her family, and the Palestinian people as a whole.

Forced to stop reading her statement, Rasmea ad-libbed: “I’m not a terrorist and my people are not terrorists. [The Israeli military] tortured me. They raped me. They destroyed my house…I will raise my voice to say this: we have the right to struggle for our country.” And at a post-hearing press conference, she added, “Really, I feel angry because the judge didn’t allow me to [tell] my story…but we will continue to struggle for our cause. We will liberate our Palestine, all [of] Palestine.”

Drain ended the proceedings by restating the agreed-upon sentence, which includes no further jail time, the revocation of Rasmea’s U.S. citizenship, and deportation. He also fined her $1,000. Rasmea and her attorneys met after the hearing with Immigration and Customs Enforcement, but did not yet agree upon a departure date.

A number of solidarity messages followed Rasmea’s address to the media, and the supporters were loud and passionate in their defense of her and of Palestine. 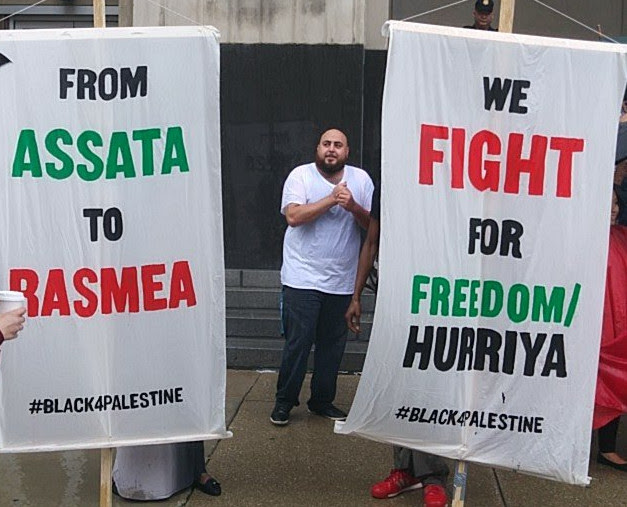 And Joe Iosbaker, a leader of the Committee to Stop FBI Repression (CSFR), concluded by asking, “Is Rasmea the bravest person you’ve ever seen in your life?…If you ever doubt that you can be brave, we have our icon, we have Rasmea Odeh [as an example]!”

A few days before the hearing, a standing room only crowd of over 1,200 supporters attended an event to #HonorRasmea on Saturday, August 12th. 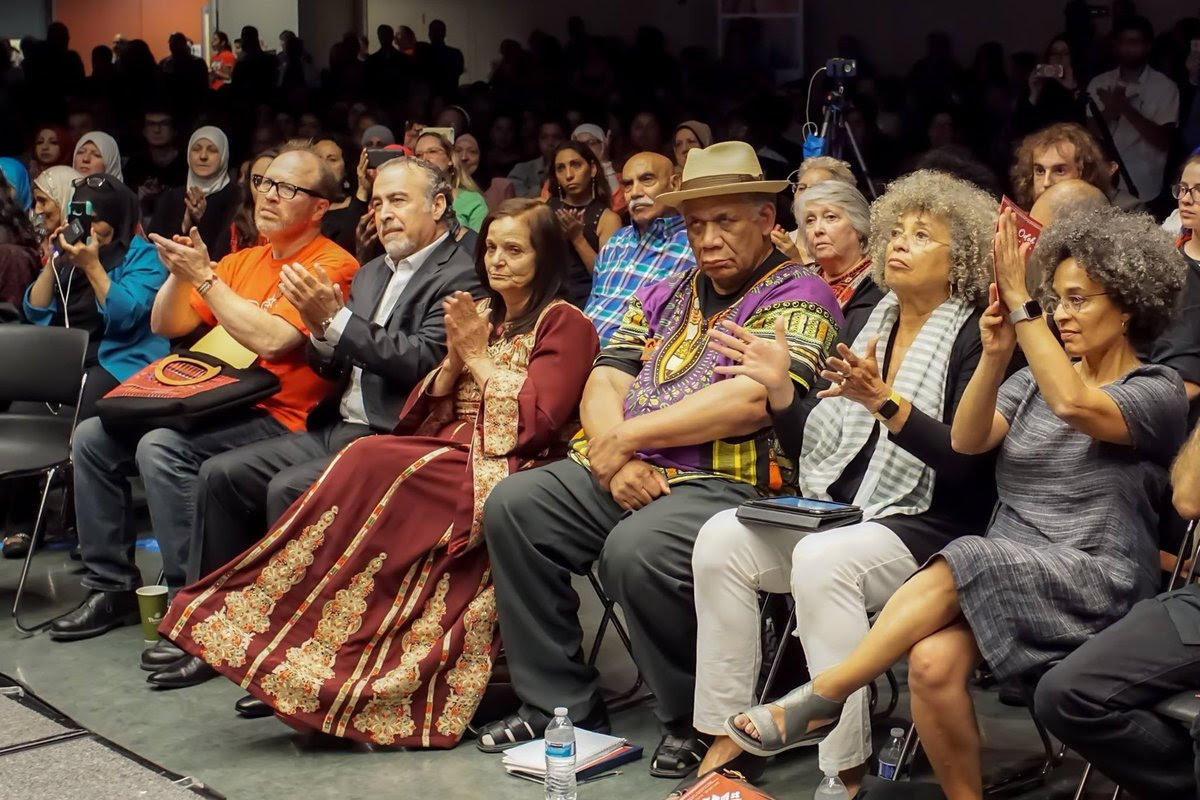 The powerful event, hosted by the defense committee, USPCN, CSFR, and the Chicago Coalition to Protect People’s Rights, featured a keynote address by Dr. Angela Davis, the scholar and Black Liberation Movement legend who cut short her vacation to stand in support of Rasmea.

In her speech, Davis commended Rasmea for linking justice in her own case to justice for political prisoners all across the world, and added, “We follow the example of Rasmea Odeh when we stand up and fight back!”

The hosts gave awards to Rasmea’s incredible legal defense team, as well as to the Chicago Alliance Against Racist and Political Repression, which mobilized members for every hearing and the trial in Detroit. Frank Chapman accepted on behalf of the Alliance, and explained the importance of unity between the Black and Palestine liberation movements.

A statement from CSFR leader Meredith Aby, and electrifying performances from Rebel Diaz, KoStar, and Shadia Mansour, rounded out the evening, which was described by long-time solidarity activist Reverend Don Wagner as a “brilliant, inspirational, and utterly fantastic sendoff for dear Rasmea…it was one of the finest evenings the Palestine support community has witnessed in my 40 years of involvement.”

Media reports on the hearing and the #HonorRasmea event

Rasmea Odeh at Detroit sentencing: ‘We will continue to struggle for our cause! We will liberate our Palestine - Fight Back! News

Rasmea’s statement to the court

On this court’s platform, I’m standing today to raise my voice on behalf of myself as a Palestinian woman and on behalf of all Palestinian people, whether under occupation, in refugee camps, or scattered in exile across the world.

Honorable Judge Drain: First, I would like to clarify that my following message is not directed at you personally.

I am a Palestinian woman who was born into a family that had simple dreams and desires to live in peace and tranquility, far away from bombs, explosions, murder, and displacement.

But those dreams turned into a nightmare at the hands of the Zionist Haganah gangs whose crimes are hard to imagine. The Zionists committed massacres, killing children and the elderly without any consideration of human values. They displaced hundreds of thousands of my people, and killed thousands more, in 1947 and 1948, upon the establishment of the state of Israel. They turned us into strangers in our own country, and pushed us into the inhumane conditions of refugee camps inside Palestine and other Arab countries.

The Israeli goals were not satisfied in 1948, so they pursued the ambitions of Zionism and launched another war in 1967, illegally occupying the rest of Palestine and parts of surrounding Arab countries.

The Israeli occupation of Palestine is a crime; its use of biological and chemical weapons is a terrorist crime; demolishing schools, homes, hospitals, clinics, and places of worship is a crime; imprisoning hundreds of political organizers and resisters (including dozens of children) without charge is a crime; putting up the Apartheid Wall is a crime; killing people is a crime; and collective punishment is a crime!

Many countries in this world have struggled to win their independence. International law and all the United Nations conventions state that people have the right to fight for their independence, and to expel the colonizer and the occupier.

People in the U.S. struggled against British colonialism for their independence, and that is the reason the 4th of July is celebrated. Why are the Palestinians prohibited from struggling for our independence?

When Palestinians have fought for our rights over the years, all U.S. administrations have responded by supporting Israeli crimes and brutal aggression, falsely describing Israel’s acts as “self-defense.” At the same time, the U.S. government calls us terrorists by placing all of our legitimate resistance organizations on its terrorist list!

I wonder how the U.S. or any other country would respond if they were invaded by a foreign force? If people in the U.S. were to defend themselves, would they be considered terrorists, and would their resistance organizations be placed on a terrorist list?

The Arms Export Control Act of 1976 prohibits the U.S. from exporting arms in situations where such arms would “…aid in the development of weapons of mass destruction… [or] increase the possibility of outbreak or escalation of conflict…,” and also prohibits use of such arms against civilians and innocents.

Thus, the U.S. government or any U.S. company violates the law if it exports weapons to a state or group that uses them in this way. The reality is that the U.S., as Israel’s patron, violates its own laws by supporting Zionist aggression. That means the U.S. is also guilty of crimes against the Palestinians.

This country’s military, political, economic, and diplomatic support allows Israel to continue its colonization and military occupation of Palestine, and to commit crimes prohibited by international law and U.S. law. That is why we organize for Palestinian rights in the U.S., because it is this government that must also be held responsible for Israel’s state terrorism against my people.

We, the Palestinians, have been struggling against oppression for one hundred years, ever since the British Balfour Declaration promised the world that it would support the colonization of our country. And for almost 70 years, the manufactured state of Israel has been doing the bidding of the powerful British and U.S. empires. This Israel has no right to exist as a racist state of white settler colonialists, just like South Africa had no right to exist as the racist, Apartheid state it was.

This Israel represents nothing but violence and ethnic cleansing against my people. Many years of negotiations for a political settlement have been a huge failure, because Israel continuously demands recognition as a Jewish state, which goes against all notions of equality and democracy; and because it wants to liquidate all the rights of the Palestinians, including our rights to return, self-determination, equality, and political independence.

Each Israeli government moves more and more to the extreme right, and Netanyahu’s is the worst of them, launching three horrible wars on Gaza. He destroyed homes, schools, health clinics, and our infrastructure as a whole, killing thousands, and finally imposing a siege on the entire Gaza Strip.

Recently, Israel installed metal detectors and security cameras at the entrance to the Al Aqsa Mosque in Jerusalem, prompting weeks of massive protests. Three Palestinians were killed, and a thousand injured, before Israel was forced by our mass movement to remove the barriers.

I personally experienced a harsh, unstable, and terror-filled life in Palestine, like all my people under occupation. I was pushed off my land two separate times, my family home was destroyed twice, and my young sister was killed by the trauma of war. I was a political prisoner who was brutally tortured and raped by Israeli soldiers and prison authorities, and was almost killed more than once.

I continue to be terrified of the future for myself and my people. I can still almost feel the accelerated pounding of the people’s hearts while they are running to find shelter, the horrific screaming of the children, the moans of the people under the rubble of their homes, and the sounds of them dying from bombs, missiles, and bullets.

My people have the right to struggle to rid ourselves of the Israeli occupation of our country. The U.S. government must stop disavowing our rights, and stop working with the Israelis to prosecute activists and organizers here. Most of the people and governments in the rest of the world are with us. Millions of people are supporting the Boycott Divestment and Sanctions (BDS) movement.

Black-Palestinian unity and solidarity is at its absolute height in the U.S., because both peoples recognize that the racist nature of the U.S. government and the racist nature of Israel are the same. When I saw those white racists marching in Virginia, all I could think of was the white settlers in Israel burning Palestinian children to death or marching to attack my people in Jerusalem.

Many of the social justice forces—from the Women’s March, the Movement for Black Lives, and anti-occupation and anti-Zionist American Jews, to immigrant rights, anti-torture, and civil liberties organizations—that supported my defense campaign did it not only because they support me as a survivor of torture and injustice, but also because they support the much more important cause of the liberation of all of Palestine—a democratic, secular Palestine for all.