Rasmea Odeh received TWO standing ovations at the #InternationalWomensDay event at the Chicago Teachers Union hall last night. Watch the speech here, and it is also transcribed below.

In addition, our friends from Jewish Voice for Peace members Eli Massey and Lynn Pollack wrote pieces supporting and defending Rasmea from recent media attacks by contributors to the Chicago Tribune and other outlets. We thank JVP for its support.

Members of the Rasmea Defense Committee in NY are also responding to a New York Times piece, and we will share that with you when it is published. 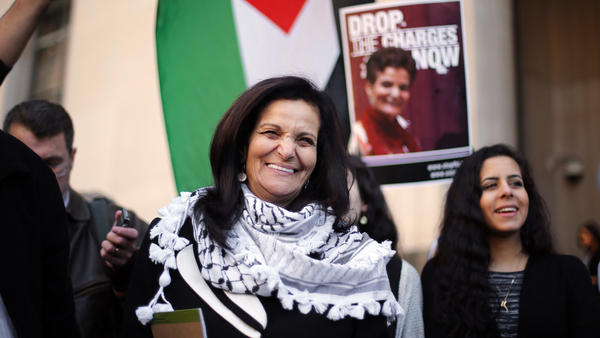 Good evening everyone. My name is Rasmea Odeh, and along with my friends Barbara Ransby, Angela Davis, and five other organizers from the U.S. and around the world, I signed the article that called for the women’s strike on this day. I am a Palestinian, and I have dedicated my life to the liberation of women and of my people in general.

I want to talk tonight about my homeland of Palestine, and about my adopted homeland of the U.S., because there are clear similarities. Israel’s government today is more right wing than ever, and it continues to target my people with racist policies, political imprisonment, stealing of land, and killing. An Israeli soldier just recently received only 18 months for killing a Palestinian who was wounded and lying on the ground unarmed. He probably won’t even serve the entire sentence, because Palestinian lives are not worth much to the Israeli government.

In the U.S., we are living in a time that is worse than the few years after the September 11th attacks. The Muslim Ban tries to keep people from six Arab, African, or Muslim countries from entering the U.S. for many months. Other policies threaten undocumented Mexicans, Central Americans, and other immigrants with mass detention and deportation. Still other policies are criminalizing protests and making it easier for police to get away with committing crimes and killing Black people. An 18 year old Black young man was found hanging from a tree in Washington State in January, and African and South Asian men have also been recently murdered in hate crimes.

Israeli and U.S. policies make it easy to target our people, but Palestinians are resisting these attacks in Palestine, and here in the U.S., we are all resisting Trump’s attacks on immigrants, Black people, Arabs and Muslims, and others.

I want to end by telling you a little bit about my own story. Articles in the Chicago Tribune, New York Times, New York Post, and other newspapers are attacking me because of my participation in this day of action. They are calling me a terrorist because members of the Israeli military tortured and sexually assaulted me into a false confession almost 50 years ago.

On International Women’s Day in 2017, I am here to say that I am a survivor of sexual assault, and I testified to the United Nations about it in 1979. I have been convicted in the U.S. based on this torture evidence, but I won my appeal and am going to a re-trial on May 16th. Before that, please join us in Detroit on April 4th for a pre-trial hearing. Sign-up sheets for the trip are on our table in the back. This is a time of resistance of women and all people in Palestine, the U.S., and across the world. And I am resisting too!