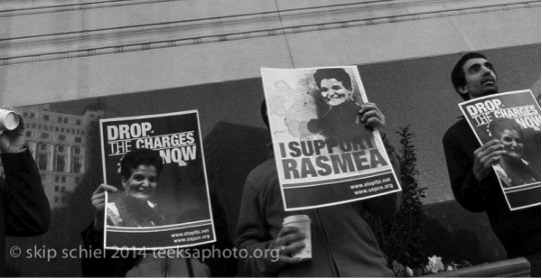 Today, U.S. Attorney Barbara McQuade announced that a grand jury she had empaneled returned a new, superseding indictment against Rasmea Odeh for unlawful procurement of naturalization. This new indictment, just four weeks before her retrial, is a vicious attack by prosecutors desperate after a series of setbacks in their case against the Chicago-based Palestinian American community leader. From the outset, the government has attempted to exclude and discredit evidence of Rasmea’s torture at the hands of Israeli authorities, but the 6th Circuit Court of Appeals ruled against the prosecution, which led to the retrial; and the government’s own expert affirmed that Rasmea lives with Post Traumatic Stress Disorder (PTSD).

As the January 10 retrial approaches, and knowing that it faces the real prospect of losing before a jury, the U.S. Attorney’s office has reframed its case against Rasmea, putting allegations of terrorism front and center. In the first trial in 2014, prosecutors were barred from using the word “terrorism,” because Judge Gershwin Drain agreed the word would bias the jury. The new indictment adds two allegations that preclude this protection: first, that the crimes she was forced by torture to confess to are “terrorist activity”; and second, that she failed to report an alleged association with a “Designated Terrorist Organization.” Despite the government’s claim that this is a simple case of immigration fraud, this new indictment is written to ensure that Rasmea stands before a jury as an accused terrorist.

“They are switching course because they know that a jury will believe Rasmea,” says Nesreen Hasan of the Rasmea Defense Committee and its lead organization, the U.S. Palestinian Community Network. “We have always said, from day one, that this is a political case, and that the government is prosecuting Rasmea as part of a broader attack, the criminalization of the Palestine liberation movement. This new indictment is literally the same charge, with the same evidence – immigration forms. Only now, they want to paint Rasmea, and all Palestinians, as terrorists. The real criminals in this case are the Israelis who brutally tortured Rasmea 45 years ago, as well as those in the U.S. government who are trying to put her on trial for surviving the brutality committed against her.”

Prosecutors will be disappointed to find that these new allegations fail to erode Rasmea’s support. People have mobilized by the hundreds for countless hearings, every day of her 2014 trial, and her appeal earlier this year. “We have people ready to come from across the Midwest to stand with Rasmea in Detroit on January 10, but we are also prepared to adjust those plans to be there whenever we are needed,” says Jess Sundin of the Committee to Stop FBI Repression, who lives in Minneapolis and has mobilized dozens of Minnesotans and others in support of the defense. “We will redouble our organizing and fundraising work, and make certain Rasmea has the best defense possible.”

Given the desperate move by prosecutors, it is clear that things may change quickly. Rasmea’s legal team has filed a motion to postpone the January 10 trial date, so they can prepare a defense against the new allegations. According to lead defense attorney Michael Deutsch, “We also intend to challenge this indictment as vindictive and politically-motivated.”

The Rasmea Defense Committee is urging supporters to continue to call U.S. Attorney Barbara McQuade at 313-226-9100, or tweet @USAO_MIE, and demand that she stop wasting taxpayer money, that she stop persecuting a woman who has given so much to U.S. society, and that she #DropTheChargesNow against Rasmea. In addition, the committee is calling on supporters to help win #Justice4Rasmea by donating to the defense and organizing educational events about the case.