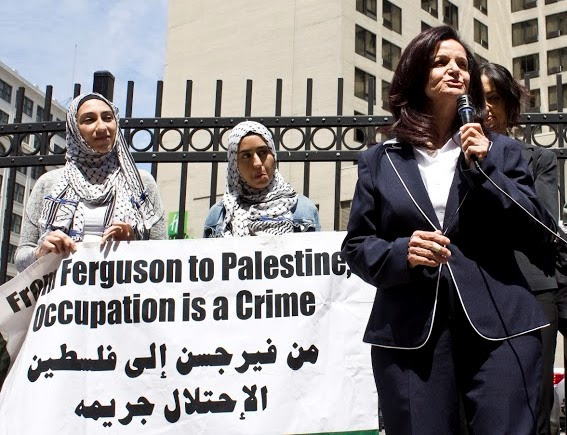 More victories for the defense in Rasmea’s case!

Over 100 people from all over the Midwest gathered in Detroit to support Rasmea Odeh as she, her attorneys, and the prosecution appeared before Judge Gershwin Drain for a status conference on Monday, June 13, 2016.

After the conference ended, Rasmea joined the waiting crowd chanting her name, and Michael Deutsch, her lead attorney, addressed the media, explaining that a tentative date for a new trial has been set for January 10, 2017!

This is what the Rasmea Defense Committee has been anticipating ever since the appellate court decision a few months ago. Rasmea was convicted of a politically-motivated immigration charge in 2014, and sentenced to 18 months in prison and deportation last year. In February 2016, the Sixth Circuit Court of Appeals sent the case back to Judge Drain, saying he had wrongfully barred the testimony of a torture expert that was critical to Rasmea’s defense. At the trial, Rasmea was not allowed to tell the entire story of Israel forcing her to falsely confess to alleged bombings in 1969, when she endured over three weeks of vicious sexual, physical, and psychological torture at the hands of the Israeli military.

Rasmea suffers from Post-Traumatic Stress Disorder (PTSD) because of this torture, which, according to world renowned psychologist, Dr. Mary Fabri, caused her to suppress the horrible recollection of the arrest when she answered questions on her immigration application. Judge Drain excluded Fabri’s testimony from the trial, and disallowed any evidence about the rape and torture. Appeals court judges sided with the defense, and wrote in their opinion that if the judge cannot determine new legal avenues to exclude the expert testimony, Rasmea must be granted a new trial, which it appears will happen.

At the status conference yesterday, the government called for a “Daubert hearing,” which is used to challenge the validity and admissibility of expert testimony (in this case, Fabri’s), and also requested to examine Rasmea with its own expert. If the hearing is granted by Judge Drain, it will happen on November 29 of this year, the International Day of Solidarity with the Palestinian People.

Two other positive developments occurred yesterday as well. Deutsch requested to have Rasmea’s “burdensome reporting requirements” to probation authorities reduced from once a week to once a month. Judge Drain did not object, commenting that his earlier concerns about her being a flight risk “have been alleviated.” He also suggested that he would be willing to ease travel restrictions and allow Rasmea to occasionally travel within the U.S. The government wants to speak to the probationary authorities before agreeing to the end of the travel ban.

And speaking of the government, we all remember the zionist, right wing ideologue Jonathan Tukel, the lead prosecutor on the case, who was handled deftly by Rasmea during his disrespectful cross examination of her, and who described us as “mobs and hoards [sic]” while trying to criminalize our organizing of Rasmea’s political defense. Well, he’s GONE. He is off the case, and we are happy that we do not have to deal with his racist arrogance any longer.

While waiting for Rasmea and her defense attorneys to join them, her supporters—who hailed from Chicago, Detroit, Dearborn, Ann Arbor, Cincinnati, Milwaukee, Grand Rapids, Minneapolis, and even as far away as Texas, and included about a dozen leaders from the Arab Women’s Committee that Rasmea leads—rallied outside of the downtown courthouse for almost three hours, chanting and picketing and listening to solidarity speeches from organizers and activists who have traveled many times to be with Rasmea at previous court appearances.

Frank Chapman of the Chicago Alliance Against Racist and Political Repression opened the program with a pledge to continue to fight for #Justice4Rasmea and to “free all political prisoners in the U.S.” Linden Gawboy and Mick Kelly brought greetings from the Welfare Rights Committee (WRC) and the Committee to Stop FBI Repression (CSFR) in Minneapolis. Kelly called the case “a political trial carried out by an empire trying desperately to shore up an increasingly unpopular and unstable Israel,” and Gawboy’s WRC mobilized more people to pack the courtroom for Rasmea’s trial in 2014 than any other organization outside of Chicago.

Fariba Nourian, an Iranian-American with the Cincinnati Palestine Solidarity Coalition ended her statement with a quote from Assata Shakur: “It is our duty to fight. It is our duty to win!” Nadine Darwish, a leader of Students for Justice in Palestine (SJP) at Loyola University-Chicago, discussed the importance of Rasmea’s life and work to students everywhere. And Detroit poet Tawana Petty (aka Honeycomb) joined Kristian Bailey, member of both the Black Youth Project (BYP) 100 and the National SJP, to talk about Black-Palestinian solidarity and recite a poem from the powerful video, WHEN I SEE THEM I SEE US.

As Rasmea herself stated during the press conference, “We want you to continue to help build our movement across the country as we seek justice. I need you now more than ever. It is together that we can win.”

And as we continue to chalk up victories, you can continue to help by donating to the defense, organizing educational events in your communities, staying in touch through justice4rasmea.org, and shifting the demand to Drop the Charges Now!

• Rasmea Odeh: A ‘symbol’ for Palestinian struggle in US, article and video from Ali Harb and Dave Liens for Middle East Eye.