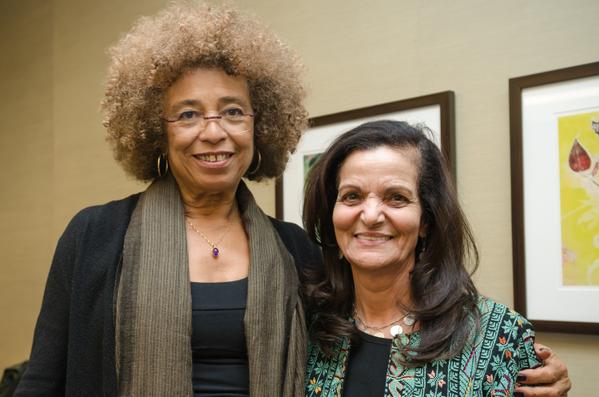 Rasmea Odeh speech to the opening plenary of the INCITE! Color of Violence 4 Conference

I’m so glad to join all of you today at this conference, to express my pleasure to be back amongst all of my family, friends, supporters, and the community who I love and respect so much.

I’m so grateful for the support, care and endless love you have shown me, and for so much of the time and effort you have dedicated to the case since my arrest in October 2013. Your support gives me important strength, and continues to allow me the resilience to achieve justice.

The isolation I faced while incarcerated was a truly upsetting experience. To feel that they really wanted to destroy me was extremely frightening! I had to work very hard to protect myself from that. I had to work hard to keep myself in sound mental condition, so that I could focus on trying to maintain my physical health. I began participating in various activities: singing, yoga, prayer, expressing my feeling in words, and imagining how friends would advise me.

My incarceration forced me to relive my experience in Israel prisons. While in custody, they tried to control every aspect of my life, my physical body, my mind, and it reached a point where I would not sleep, because I did not want to put myself in a position where I was weak and could be controlled. The whole system of incarceration is designed to destroy people’s humanity and make them feel hopeless and in despair. I saw with my own eyes how the other prisoner women were driven to extremes, like screaming and shouting, just to feel like they were still human and still alive. Humans are social; to be in isolation not only cuts you off from other people, it also cuts you off from yourself. It destroys you emotionally, psychologically, and spiritually, and makes you feel as if you are no longer whole. This is the deadliest thing.

I’m so lucky to have family, friends and supporters, including all of you, in my life. The letters of support I received and the ones you sent to the judge played an important role in breaking the isolation and providing a warm feeling in my heart and mind while I was in the freezing cell. With all of your support, I was able to face the challenges and difficulties that threatened my morale and my life!

I am especially grateful to the brave immigrant and refugee women I have been working with as a community organizer for the past 10 years with the Arab Women’s Committee, a project of the Arab American Action Network in Chicago. They left their families, their children, their responsibilities at work and at home, to travel with me to my trial and sentencing and express their support. In the Arab Women’s Committee, 600 members work together for positive change through education, community organizing, and leadership training, and challenge systems of oppression such as national and racial profiling, sexism, and patriarchy. The AWC is a tool for Arab immigrant and refugee women to look inside themselves, find and develop their strength and confidence, raise their voices, and participate in decisions that affect their lives.

I am a Palestinian woman. I was born and grew up in a war zone. I have been struggling with my people for more than 66 years under Israel’s illegal colonial military occupation and its oppressive and racist practices. The Israelis committed massacres and expelled the Palestinians from our homes and land at gunpoint in 1947 and 1948. This was followed by another war in 1967, when they occupied the rest of Palestine.

Israeli forces deliberately target a large number of Palestinian women and their families, shelling them while in their homes. The military checkpoints and the Apartheid wall prevent the unity of families, and keep patients from reaching health centers and hospitals. Many women have been deprived of their right to natural childbirth, forced to give birth at checkpoints in sight of Israeli soldiers. Some of these women lost their babies in childbirth. Israel holds 36 Palestinian women, include some who are pregnant, and 156 children in its jails as political prisoners.

This is the real face of Israel. For over 66 years, we have known nothing but violence and ethnic cleansing against my people. Many years of negotiations for a political settlement have been a huge failure, because Israel continuously demands recognition of the Jewishness of the state, which goes against all notions of equality and democracy, and because it wants to liquidate all Palestinian inalienable rights, including the rights of return, self-determination, equality, and independence. Continued settlement expansion, settler violence against Palestinians, and the occupation’s military violence enjoy the support of many different sectors of Israeli society. The racist attitudes of the far-right-wing parties that will make up much of Netanyahu’s coalition government is unfortunately the norm in today’s Israel.

We are here at this conference to stand up for Justice, and as you know, justice is not a gift or a handout that we wait for someone to give us! Justice is a human right that must be fought for and won. The way women all over the world are fighting for their rights and the rights of their people. This month we celebrate them, and I especially want to recognize the Palestinian women who continue struggling against occupation, particularly those who are political prisoners in Israeli jails.

I lived the life of a political prisoner for 10 years in Palestine, as well as one month of incarceration in Michigan last year, and I know how difficult it is. This recent experience gave me the opportunity to better understand the oppression that women of color, and especially Black women, face in this society. I saw the racism that they face, the dehumanization, the fact that so many were incarcerated for non-violent crimes, the poverty, the refusal of our government to understand the socio-economic and psychological conditions that are the cause of the vast majority of alleged crimes in this country. I now fully understand the prison-industrial complex that sister Angela Davis so eloquently talks and writes about every day.

When I was jailed last year, the American media and the U.S. government had already portrayed me as a criminal and a terrorist, so I had to explain who I really am to the other women in prison. This made incarceration double hard. I had to work with the other prisoners to build a shared struggle. But it wasn’t difficult for them to understand me and my struggle because we face similar oppressions.

From the first day in jail in Michigan, I realized that all of us had similar experiences, where the administration would tell us horrible stories about new women who were coming in. But these were lies and they were telling us this to try to divide and conquer us. The prison administration also told me that the other women prisoners might attack me, and that I needed protection. But that was a lie as well. I worked to build relationships with the others, but after only one week, they moved me away to another section, and a day later, they put me in solitary confinement, where I remained for three weeks.

That was a tough challenge. But challenges are not frightening, as long as we believe in our rights and the principles that we stand for, have confidence in ourselves, and rise up together. My community and our supporters helped get me out of jail. And now we will continue to organize to win the appeal of my conviction.

Lastly, all of us have dedicated our lives to the same hopes and dreams. We all stand for social justice and liberation in this country, the same way my people have dedicated their lives to the liberation of Palestine. Palestinian women are looking to this conference for your continued support of our rights—freedom for Palestinian political prisoners, the right of return, self-determination and independence, and one, single, liberated state where everyone is equal.

I am a citizen here. I do not want them to take away my citizenship or take me away from my home and my community. I need your support, because I want to continue to work with all of you to make this country and this world a better place to live and raise our families. You can join my campaign by going to the website justice4rasmea.org. And you can tell me where to go to stand and march with you for as long as it takes to win justice and liberation for us all.

Thank you to all the organizers of this conference, and to all the volunteers and participants as well!