The Case of Rasmea Odeh: A Palestinian Hero

Rasmea Odeh is a leading member of Chicago’s Palestinian, Arab, and Muslim communities, and her decade of service in Chicago has changed the lives of thousands of people, particularly disenfranchised Arab women and their families. She has been with the Arab American Action Network (AAAN) since 2004, and is responsible for the management of day-to-day operations and the coordination of its Arab Women’s Committee, which has a membership of nearly 600 and leads the organization’s work in the areas of defending civil liberties and immigrants’ rights. She is a mentor to hundreds of immigrant women, as well as many members of the AAAN’s staff and board, and is a well-known and respected organizer throughout Chicagoland, the U.S. and the world.

In 2013, Rasmea received the Outstanding Community Leader Award from the Chicago Cultural Alliance, which described her as a woman who has “dedicated over 40 years of her life to the empowerment of Arab women, first in her homes of Palestine, Jordan and Lebanon, where she was an activist and practicing attorney, and then the past 10 years in Chicago.” 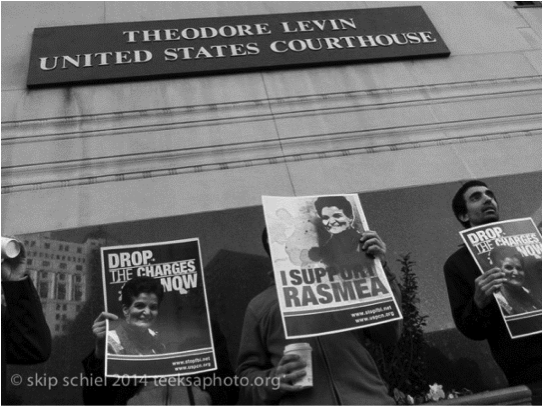 Rasmea is a community icon who overcame vicious torture by Israeli authorities while imprisoned in Palestine in the 1970s, and an example for the millions of Palestinians who have not given up organizing for their rights of liberation, equality, and return.

The prosecution of a hero

In the early morning of Tuesday, October 22, 2013, then sixty-six year old Rasmea Odeh was arrested at her home by agents from the Department of Homeland Security. She was indicted in federal court, charged with Unlawful Procurement of Naturalization, an allegation based on answers she gave on a 20-year-old immigration application. Rasmea, her supporters, and her legal team say that the immigration charge was nothing but a pretext to attack this icon of the Palestine liberation movement.

The government claims that Rasmea failed to disclose that she was convicted by the Israelis of participating in bombings in 1969. This conviction in a military court was the result of a false confession made after she was viciously tortured and raped by Israeli military authorities for weeks. There is no due process in Israeli military courts, which “convict” over 99% of Palestinians who come before them, and “evidence” from these should not be accepted in a court in the U.S.

Despite this, Rasmea’s case on immigration charges went to trial in Detroit in November 2014.

There, Federal Judge Gershwin Drain allowed the Israeli military court conviction to be entered into evidence, but barred testimony about her torture at the hands of her Israeli captors. That ruling eliminated the testimony of expert witness Dr. Mary Fabri, a clinical psychologist who has decades of experience working with torture survivors. Fabri was prepared to testify that the allegedly false answers on the immigration forms were the result of Rasmea’s chronic Post-Traumatic Stress Disorder (PTSD).

Rasmea never set out to hide her past. She had testified about her torture at the United Nations when she was released in 1979. As her lead attorney, Michael Deutsch, said, “It was well known that she was convicted, and traded [in a prisoner exchange]. The U.S. Embassy knew it, the State Department knew it, and Immigration should have known it.”

Never really about immigration, the case against Rasmea grew out of the investigation of 23 anti-war and Palestinian community organizers in Chicago and Minneapolis, who were subpoenaed to a federal grand jury in 2010. Make no mistake. Rasmea came under attack by the U.S. government because she is Palestinian, and because for decades, she has organized for Palestinian liberation and self-determination, the Right of Return, and an end to Israeli occupation and colonization. Palestine support work, especially the Boycott Divestment Sanctions (BDS) movement, has made a number of recent gains, and the long arm of federal law enforcement has attempted to crack down on it, like it has on all effective and impactful movements for social justice in the history of this country. Rasmea’s prosecution is part of this crackdown. 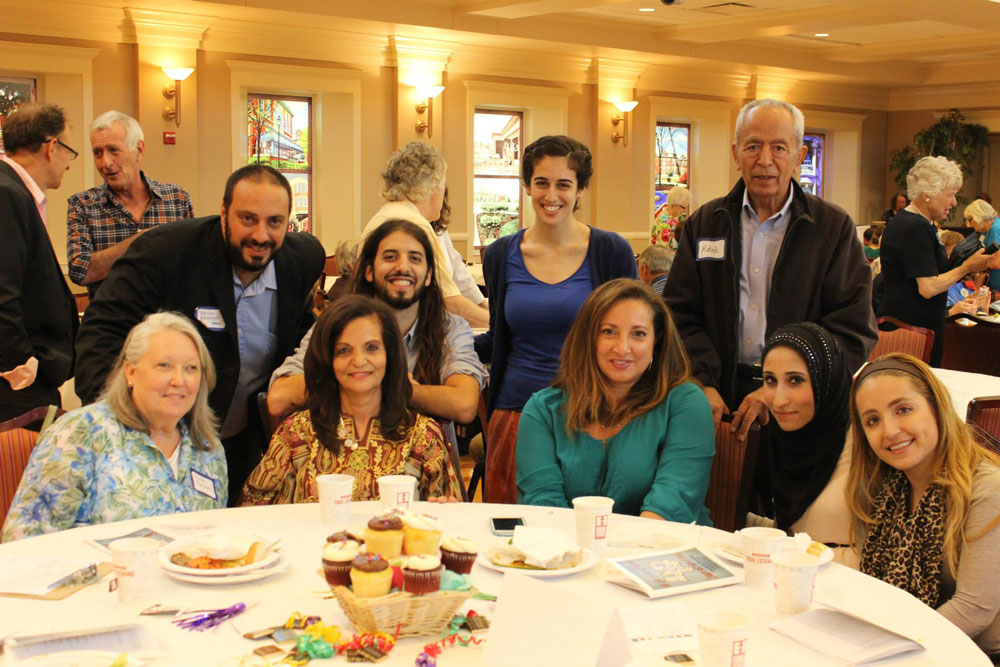 The fight for justice

During her November trial, Rasmea and her defense team put the crimes of Israel on record. Her story of being exiled from the village of her birth, Lifta, in 1948; of being exiled again during the 1967 war; of experiencing the death of her sister after the raid on her home in 1969; and of being a political prisoner, one of the most famous in the history of the Palestine liberation movement—all these are stories of the crimes of apartheid Israel, crimes that continue today in the racist settler and military assaults we have seen in the Gaza Strip, Jerusalem, 1948 Palestine, and the West Bank. Israel’s terrorism, and the U.S. government’s complicity, were exposed for all the world to see.

Rasmea’s case is not only about the U.S. carrying out Israel’s agenda, but also connected to racist policies here. The civil rights of Arabs and Muslims are violated with impunity, particularly those who are critical of U.S. support for Israel’s crimes against the Palestinian people. This is in the context of the long history of attacks against communities that organize for social change in this country, especially Black, Chicano and Mexicano, Puerto Rican, Native, Asian, and other oppressed nationalities.

Rasmea was convicted in the unjust trial in November 2014, and imprisoned in a Michigan county jail for a month, under challenging conditions, including three weeks in solitary confinement. Supporters across the country rallied for – and won – her release on bond.

In March 2015, Rasmea was sentenced to 18 months in prison and subsequent deportation. However, because of our organizing efforts, she is staying free on bond pending appeal. The sentence was a huge blow to the prosecutor, who asked for 5-7 years. Her appeal was filed by defense attorneys on June 9, the prosecution replied on July 8, and the defense rebuttal was sent to the U.S. Court of Appeals for the Sixth Circuit on July 20. The appeals court heard oral arguments in Cincinnati in October, and Deutsch made a powerful argument for Rasmea deserving a new trial.

In February 2016, the appellate court ruled that Judge Drain erred in keeping the evidence of torture and PTSD from the jury—a huge victory for us in the case! In Detroit again for a status conference on June 13, 2016, the defense and prosecution were told by Judge Drain to set tentative dates of November 29 for a hearing on Rasmea’s expert witness, and January 10, 2017, for a new trial. These are not set in stone, but probably mean that Rasmea should now be able to tell her entire story to the courts and the jury.

Email [email protected] to join us! 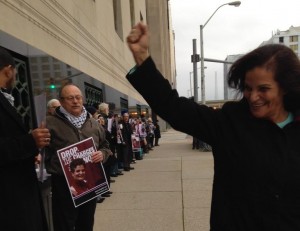 “We can find justice someplace. Maybe not in this court, maybe in another place. There is justice in this world, we will find it. We will face injustice and we have to change this world, not just in this country, in all the world in all the places there is no justice, we have to bring the justice together. In spite of everything, we are the stronger people, not the government who is unjust.” —Rasmea to supporters after November verdict