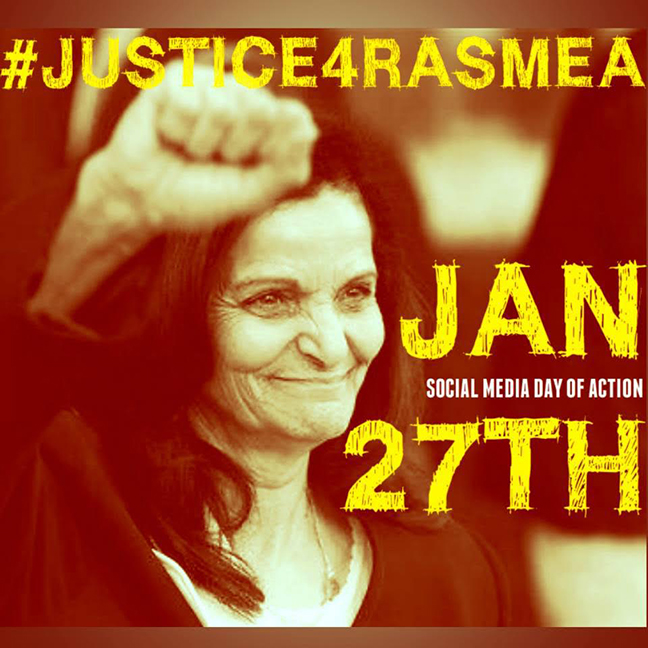 Join the Rasmea Defense Committee for a social media campaign Wednesday, January 27, 2016, in support of Palestinian American icon, Rasmea Odeh! A decision is expected any day in Rasmea’s appeal of her unjust conviction for Unlawful Procurement of Naturalization.

Participate on Twitter and Facebook on Wednesday, January 27th, using these sample tweets, hashtags, articles, memes, and other resources. Rasmea has dedicated her life to the cause of a #FreePalestine and to Arab communities across the world, including the past 12 years in Chicago. So we must continue to dedicate our organizing to win #Justice4Rasmea.

Help us spread the word about Rasmea on every social media platform you’re on!

Promos to send before Wednesday:

3.) The resource page is at http://justice4rasmea.tumblr.com/, where there will be images and text that you can share on whatever social media you are using. Make sure to include the #Justice4Rasmea hashtag.

4.) Go to www.justice4rasmea.org for more information.

5.) Prepare your city, organization, and / or campus for our Emergency Response Plan:

If the decision comes down AFTER 12 NOON, we are calling for protests the NEXT DAY at 5 PM.

Allies and supporters across the world will also be participating in the emergency response by protesting at U.S. consulates and embassies everywhere.